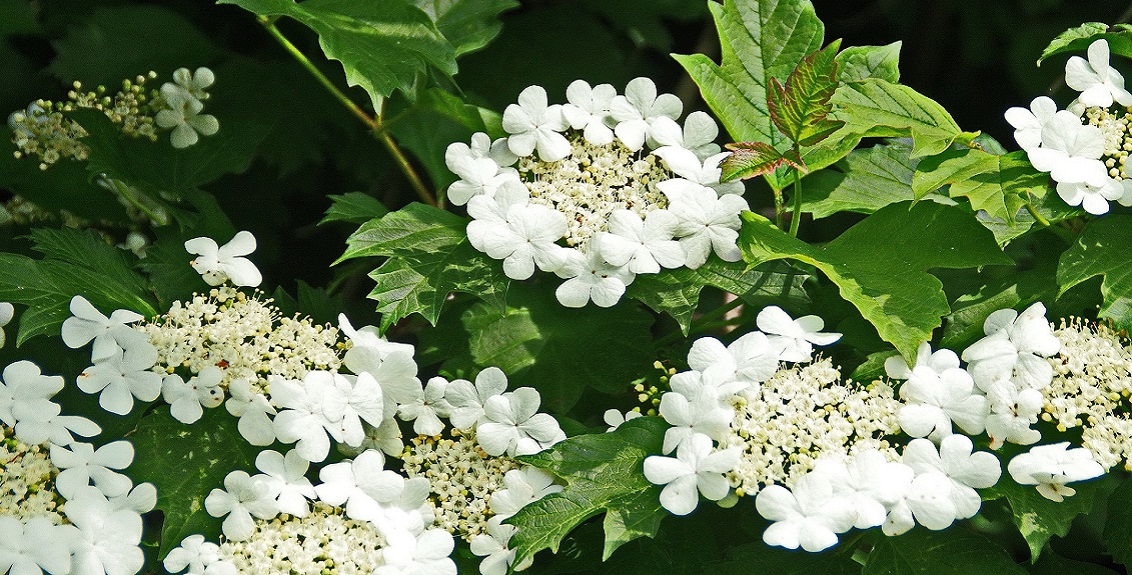 Viburnums
Viburnums are varied and versatile. There are plenty of glorious summer and winter flowering ones to choose from, and almost all are easy to please. Viburnums fit in any garden and look good in every season. This plant produces flowers, fragrance, fruit and foliage.

No matter what conditions are in your garden, you’ll find a viburnum that can take them. Most thrive in full sun or part shade, but a couple perform well in full shade. Soil pH should be on the neutral to acid side, but a few species tolerate alkaline soil. If your soil isn’t good for rhododendrons, try viburnums instead.

If you decide to plant a viburnum the tough part is deciding which one. There are more than 150 species to choose from.

Viburnum tinus – Laurustinus is more often found as a dusty hedge in the front of a small, town garden. This handsome and versatile shrub deserves to be treated with more respect. Viburnum tinus is perhaps best planted on its own, or as a background to other shrubs. You could grow a late, small-flowered crimson clematis through it that can be cut down after flowering.

‘Eve Price’ is the version most often seen. It is a neat grower with pink-budded flowers that open white. V. tinus ‘Lucidum’ makes a larger and glossier bush that has bigger flowers, but is more tender.

The x burkwoodii forms are easier to integrate in mixed borders.
If you want to mask the foxy smell of crown imperial fritillaries, try planting them nearby.

Winter is the viburnum family’s strong suit. The fragrant forms are irresistible and if you have space, the wide-spreading V. farreri is a must. It was found in China by that great plant collector Reginald Farrer in the early years of the 20th century.

For modern gardeners, the point of Viburnum farreri (or V. fragrans) is the smell of its winter flowers.


There is a terrific flush of flowers as autumn ends and another before spring begins. A twig or two will scent a room.