Heptacodium
From early September through to the first frost, Heptacodium will send out clusters of white fragrant blooms that attract butterflies, bees and other pollinators. After the flower petals drop, bright to deep red calyxes remain on the plant through October and into November. This long display of flower and calyx make this shrub a great autumn focal point. This member of the honeysuckle family is better known in North America, where people sometimes call it Seven Sons flower.

Hepta means seven and refers to the number of scented white flowers that grow at the ends of its branches. Butterflies love Heptacodium almost as much as Buddlea.

There are good reasons for growing this shrub, particularly in autumn and winter. 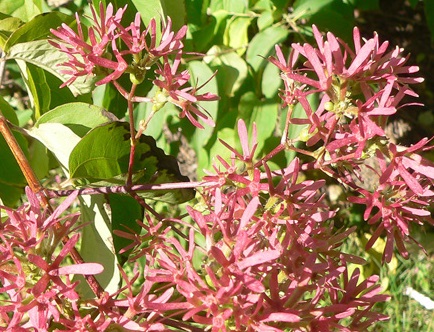 Even out of its season, in spring and early summer, Heptacodium has leaves that are interesting enough to rate a second look. They are often glossy and dark with deeply marked veins, and are elegantly arranged in drooping pairs, at right angles until they reach the end of the stem when they part at 45 degrees instead.
Heptacodium is an enormously stylish plant and the reason it is not better known is that it has been available in the UK only for a couple of decades. It was introduced to North America early last century then disappeared, until it was re-discovered in China by the Arnold Arboretum.

Heptacodium is a fast grower and optimum conditions are moist, acid woodland soil, not too shady. If it grows too large and unmanageable careful shaping can reduce it, and it is probably wise to remove twiggy growth from low down so the bush does not become too wide.

It does make suckers, which can be propagated. Heptacodium will also root from hardwood cuttings in autumn. You can even grow it from seed, as long as you’re not in a hurry.

Plant spring-flowering bulbs such as Erythronium at the feet of your Heptacodium to provide interest at the time of year when the shrub is not the main focus. Hemerocallis leaves provide a piercing early green presence and if you choose the classier H. lilioasphodelus, which also comes from China, the group will have an oriental delicacy that coarser flowers might spoil. 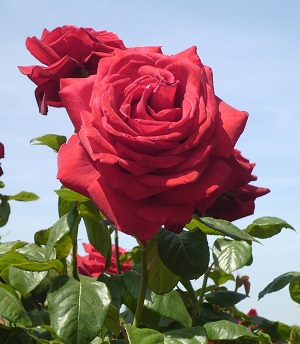